9 important facts about the Panchayati Raj Institutions in India

The Panchayati Raj Institution (PRI) in India has been existing as a political institution for centuries. However, they were unable to obtain the status and dignity of legitimate and responsive people bodies because of a variety of reasons such as inadequate devolution of powers and lack of financial resources. Further, there were several loopholes in PRIs such as non-regular elections, and insufficient representation of weaker sections like scheduled castes, scheduled tribes and women. Therefore, the government decided to augment the institutions of self-government, PRIs, to bring legitimacy and tackle the existing loopholes.

‘The state shall take steps to organize village panchayats and endow them with such powers and authority as may be necessary to enable them to function as units of self-government.’

Following this, the Government of India appointed a number of committees to study the administration of rural areas, including self-governance, and deliver recommendations on executing the same. 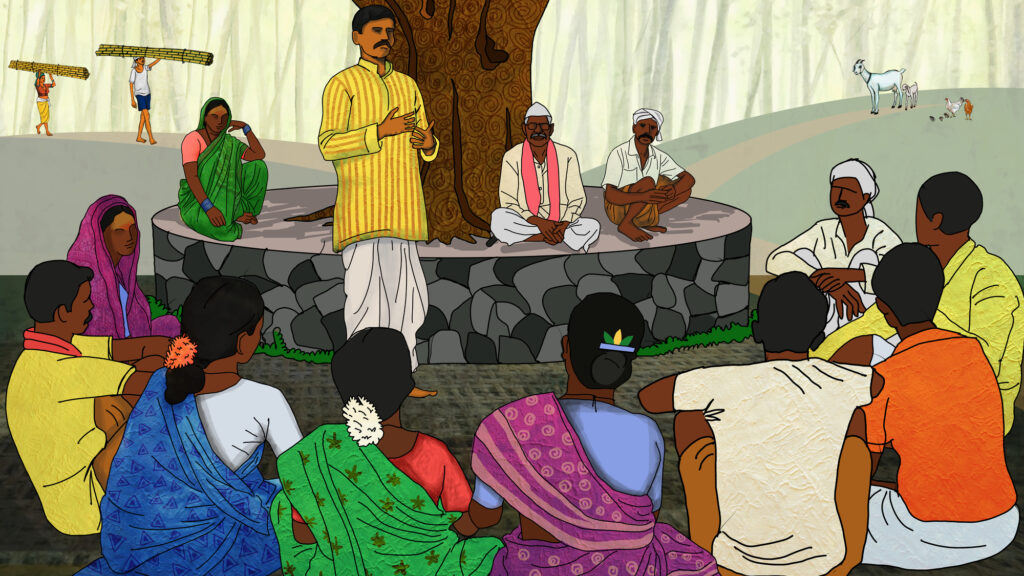 In the year 1992, the Parliament passed the 73rd and 74th Constitutional Amendments Act (CAA). PRIs were, therefore, established by the 73rd Constitution Amendment Act, 1992 to help build democracy at the grassroots level and promote rural development in the nation. Through the amendment, India introduced the third structure of governance, local self-governments in districts, zones, and villages.

The 73rd Constitutional Amendment Act conceptualizes PRIs as instruments of planning for economic development and social justice, and stipulates the transfer of powers and functions to PRIs as part of the decentralization process. They are also responsible for planning, implementing and monitoring various developmental programs.

The following are the 9 important facts on the Panchayati Raj Institutions framed under the 73rd Constitutional Amendment Act.

The 73rd Constitutional Amendment Act aimed at the democratic decentralization of power and resources among the central government as well as the local bodies such as PRIs. This includes the devolution of activities, functionaries, finance and the empowerment of local governance (refer section 2). It also provides for the establishment of PRIs and their role in the country’s decentralized form of governance.

The Act provides for the establishment of the three-tier system of Panchayati Raj in the states (district, intermediate and village level). These are Zila Parishad, Gram Panchayat and Gram Sabhas. Each tier is headed by an elected body that acts as the representative of its respective area.

Local self-governance is an essential component of the 73rd Constitutional Amendment Act. The act defines local self-governance as the right of every citizen to participate in decision-making that affects their daily life. In addition, it gives citizens the right to elect representatives who will represent their interests in the public sector. It also aims to strengthen the capacity of PRIs to deliver services to people living within their jurisdiction.

The 73rd Constitutional Amendments Act empowers women by reserving 33 per cent of seats and key positions within the panchayat for women. This is not applicable to all panchayats but only to those that fall under the category of gram panchayats or municipal corporations. Further, on August 27, 2009, the Union Cabinet of the Government of India approved 50 per cent reservation for women in PRIs. New women members of Panchayats are required to undertake skill training, which is imparted by training institutions assisted by the Ministry of Rural Development.

Figure: Need for empowerment of women in Panchayats

5. Reservation of seats for SC/STs

The 73rd Constitutional amendment Act has reserved seats in panchayats for Scheduled Castes and Scheduled Tribes. This was done through the introduction of separate lists of candidates for these two groups.

6. Preparation of plans by Panchayats and District Planning Commission

Panchayats are now required to prepare annual development plans. These plans must include targets, indicators, and time frames for achieving them. The district planning commission (DPC) can then review these plans and make recommendations to the state governments. Under the 73rd Constitutional Amendment, the DPC is also given the responsibility of preparing development plans for each state.

Each year, the state Finance Minister allocates a certain amount of money to each district based on the population and economic conditions. The funds are then distributed to the PRI for use in carrying out development projects.

Under the 73rd Constitutional Amendment Bill, the term of office of the Panchayat President, Vice President, Secretary, Treasurer, and other officers are fixed for a period of five years from the date of the election. Article 243 E (1) of the Constitution mandates holding panchayat elections regularly every five years.

Certain states have been exempted from the provisions of the 73rd Constitutional amendments Act. They are: Meghalaya, Mizoram and Nagaland. This is because the three states fall under Schedule VI of the Constitution and the traditional local institutions of self-government exist in these states.

The 73rd Constitutional Amendment Act has brought about many changes in the Indian political system. Yet, there are still some limitations that need to be addressed. The act provides for the reservation of 33 percent of seats for women in the panchayat. However, capacity building and empowering the women in panchayat is the need of the hour. Although there are various initiatives by the Capacity Building Division of the Ministry of Panchayati Raj, there needs to be provisions for training of the female representatives in the PRI.

There is also a lack of mechanisms for monitoring the implementation of the 73rd Constitutional Amendment Act. In addition, there is very little to no transparency in the appointment process of panchayat presidents. Further, several facts and data show that there has been very little progress with respect to decentralization, including the transfer of funds, functions and functionaries to PRIs across the country. It is therefore important to address these limitations if we want to see the full benefits of this legislation.