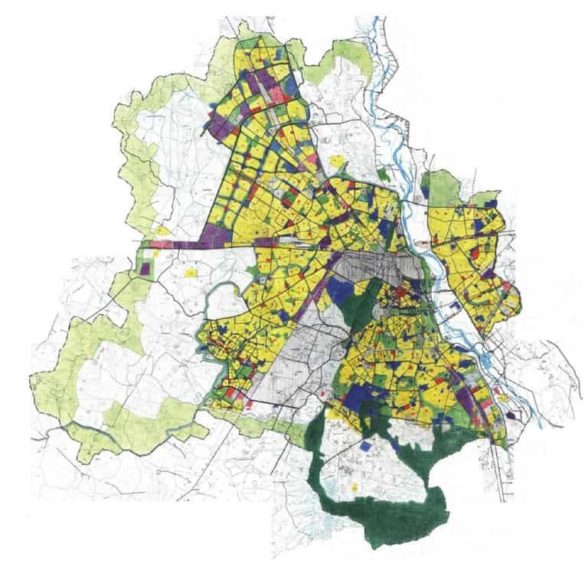 Delhi master plan tries to address numerous problems which are faced by residents in the city and provide policies to solve these problems. Study of Master Plan of Delhi is also important as it acts as guideline for various other cities and is one of the most comprehensive master plans. It remains one of the largest urban agglomerations in the world. Therefore it becomes important to look at the state of urban planning in the city and to constantly evolve and evaluate the strategies for managing its growth and development. The Master Plan for Delhi is supposed to be the main policy document for this purpose, a legally enforceable text which lays down the planning strategies and development controls applicable to the city.

Delhi is the capital city of India and home to a population of almost 16 million people. It remains part of the largest urban agglomerations in the world. This large population makes planning of immense importance for providing good quality of life to its citizens. The history of planning in Delhi is centuries old much before India got independence and after independence the planning has been done by Delhi Development Authority (DDA) which prepared Master Plans for planned growth of the city. Master Plan for year 1962, 2001 & 2021 has been made till now with increase in Urbanized Land & improvement in successive plan & aims at developing Delhi into a world class city. Master plan has been prepared while keeping in mind the larger context i.e. National Capital region for integrated growth of the city with surrounding area. Master plan gives detailed information in form of various chapters such as shelter, transportation, industry, trade and commerce, land use, development code etc. these chapters gives well defined hierarchy, sizes & regulations for various facilities which needs to be provided. Various lower order plans like Zonal plan, Sub Zonal Plans, layout plans are made on the basis of policies provided in the master plan.

The National Capital Region of Delhi is the 6th largest urban area in the world with a population of about 16 million people. Cities of such huge magnitude, having a population of over 10 million, are in fact now classified as ‘Mega Cities’. But with the growth of such large urban areas also comes the problem of managing them well to ensure good quality of life for the residents. The existence of such large numbers of people densely packed into compact regions leads to ever-increasing burdens on the resources available in the cities. Housing, waste management, slums, transportation, have emerged as some of the most pressing problems in urban areas along with the overall issue of effective utilisation of land. It is in dealing with such problems that urban planning comes to the fore, in order to provide a comprehensive development strategy for the city with a forward-looking approach. The city may thus gets divided into administrative and uses based zones with separate plans for the same along with an all-encompassing master plan for the city as a whole.

Delhi Metropolitan city, the National Capital, has recorded an unprecedented growth during last several decades. In order to save Delhi from population explosion , it is necessary to regulate growth in the areas around it. The decennial growth rate has been as high as 90% during 1941-51 and over 50% since 1951-61 to 1981-91. The explosive rate of growth in its population has been a cause of serious concerns to the govt. and all the concerned city authorities. The need for Regional approach to planning was felt as early as in 1959 when the draft master plan for Delhi was prepared. A statutory organization called “National Capital Region Planning Board” was set up in March 1985 to plan and promote the balanced and harmonious development of the region.

The population increase has heavily strained the infrastructural facilities and its resources. Therefore it was felt necessary to invest in selected settlements outside the metropolis at appropriate distance and also, in impulse sectors to relieve Delhi from its present avoidable pressures. In the regional context, it is necessary to adopt a ‘poly-nodal’ model than a ‘mono-nodal’ model one.

Comprehensive planning model for the city to achieve balanced growth and built environment. Comprehensiveness in city planning refers primarily to an awareness that the city i.e. a system of interrelated social and economic variables extending over space 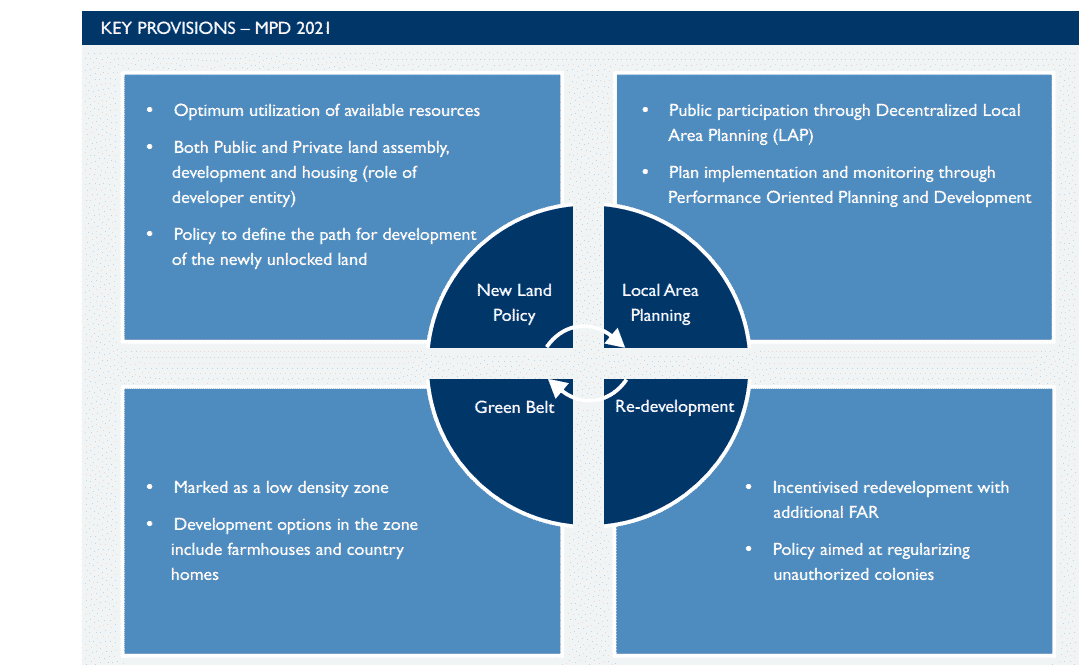 The question is how relevant and effective are such plans, both in their objectives and in their implementation. Do they pragmatically take into consideration the actual ground realities or are they too utopian in nature? Is due consideration given to the financial viability of such plans? And most importantly to what extent does this planning process curtail the rights of individual citizens to use their properties as they see fit, and to pursue any means of self-improvement that the city has to offer.

MPD 2021 provides scope for vast development within Delhi through the new Land Policy involving Private Participation. The Delhi Master Plan 2021 along with inviting private participation through opportunity for large scale development in Delhi, lays down norms to check unplanned growth and violations by developer entities. Though the land pooling model proposed by MPD 2021 brings in a remarkable change in the way private participation is perceived in the context of Delhi; it can be expected to impact the cost of new housing units. It will be interesting to witness the various parameters of land sharing, infrastructure provisions, mandatory EWS and LIG housing provision and premium factor for being located in Delhi – impacting the pricing of the MIG and HIG housing segment. Market participants have been provided with good opportunities. However, the implication of different facets of regulatory and realty market characteristics / occurrences captured in this white paper will need to be analysed further – to make an informed decision for benefiting from each opportunity.

This is the admin account of Planning Times. Articles written by our team members, contributed by guest authors and other occasional submissions are published under this account. For any details/ queries, kindly contact us with your question/ query/ feedback.

City Leaders are selling us to Tech Giants....

Disclaimer: We spend hours researching and writing our articles and strive to provide accurate, up-to-date content. However, our research is meant to aid your own, and we are not acting as licensed professionals. We recommend that you consult with your own lawyer, accountant, or other licensed professional for relevant decisions. Product or company names, logos, and trademarks referred to on this site belong to their respective owners. We might earn affiliate commission if you make a purchase through links on our website.

City Leaders are selling us to Tech...