The Pradhan Mantri Awas Yojana (Urban), popularly referred to as ‘Housing for All’ was launched on 25th June 2015 and scheduled to be implemented across 2015-2022. The mission is completely centrally sponsored scheme except for Credit Linked Subsidy Scheme (CLSS).  There are certain eligibility conditions that need to be fulfilled  by the beneficiary such as the beneficiary should comprise of husband, wife, unmarried daughters and sons. Also, they should not own a pucca house in his/her name or in the name of any of his/her family members.

Need of the scheme

Housing and Shelter forms an essential element for survival and also provides a sense of security. This flagship mission  of government of India addresses the Following issues:

This scheme is expected to cover a larger proportion of the urban poor with the increase in the subsidised loan amount and may hopefully incentivise India’s construction and real estate sector in order to reduce its traditional obsession with affluent home buyers in the cities.

These types of schemes that were generally based on the concept of public housing start way back since the refugee’s rehabilitation after Independence. In northern India about five lakhs families were provided houses until 1960s. it was in the year 1957, with the scope of second five year plan during the reign of Prime Minister Jawaharlal Nehru a village housing programme (VHP) was introduced. Under this programme loans were provided to the housing cooperatives and individuals at the rate of up to ₹5000 per unit. But, under this programme only 67000 houses could be constructed till the fifth five year plan. In 1985 Indira Awas Yojana was launched by the then prime minister Rajiv Gandhi.  This was the plan that boosted the public housing in India. It was launched targeting the SC/ST and minority population and as a rural housing programme.

Pradhan Mantri Awas Yojana was launched in the year 2015 by the Prime Minister Narendra Modi with an overall aim to provide affordable housing to fulfil the need of rural and urban poor. In case of Pradhan Mantri Awas Yojana (Urban), Rajiv Awas Yojana that was launched in the year 2011 focusing on slum free India was converged with PMAY(U) under in situ slum redevelopment scheme with the introduction to several other components that would be discussed below.

Components of the Scheme

There are a total of 4 vertical components through this scheme as follows:

It is the first vertical component in the mission. This approach aims to leverage the locked potential of land under slums to provide houses to the eligible slum dwellers bringing them into the formal urban settlement. Slum rehabilitation grant of Rs. 1 lakh per house, on an average, would be admissible for all houses built for eligible slum dwellers. States/UTs will have the flexibility to deploy this central grant for other slums being redeveloped for providing houses to eligible slum dwellers with private participation, except slums on private land.

“In-situ” redevelopment of slums on private owned lands for providing houses to eligible slum dwellers can be incentivised by State Govts/UTs or ULBs by giving additional FSI/FAR or TDR to landowner as per its policy. Central assistance cannot be used in such cases. Beneficiary contribution in slum redevelopment project, if any, shall be decided and fixed by the State/UT Government. States/UTs may decide whether the houses constructed will be allotted on ownership rights or on renewable, mortgageable and inheritable leasehold rights. States/UTs may impose suitable restrictions on transfer of houses constructed under this component.

A viable slum rehabilitation project would have two components:

In some cases, the area of slum may be more than what is required for rehabilitating all eligible slum dwellers and free sale component. In such cases, project planning authorities should give only the required slum land to private developers. The remaining slum land can be utilised for rehabilitating slums dwellers living in other slums or for housing for other urban poor. An overall flowchart representation of this component has been provided in Figure 1. 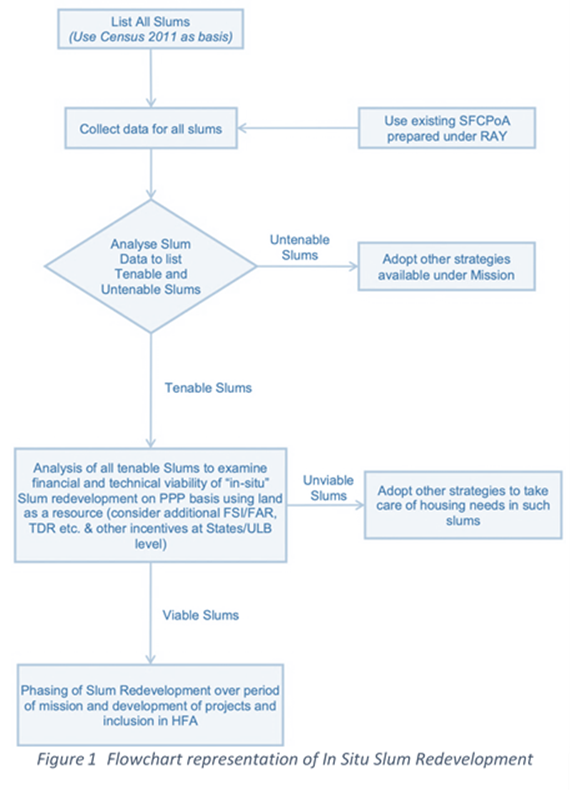 It is the second vertical component of the mission. Credit linked subsidy will be provided on home loans taken by eligible urban poor (EWS/LIG) for acquisition, construction of house. Now it has been extended to MIG as well. This is based on giving subsidies on loan interest rates, hence the name.

Beneficiaries of Economically Weaker section (EWS) and Low-Income Group (LIG) seeking housing loans can avail this scheme. They would be eligible for an interest subsidy at the rate of 6.5 % for amount upto Rs. 6 lakhs for a maximum tenure of 20 years. Interest subsidy will be credited upfront to the loan account of beneficiaries through lending institutions resulting in reduced effective housing loan and EMIs. The Net Present Value (NPV) of the interest subsidy will be calculated at a discount rate of 9 %. All particulars corresponding across the various sections has been provided in Figure 5. 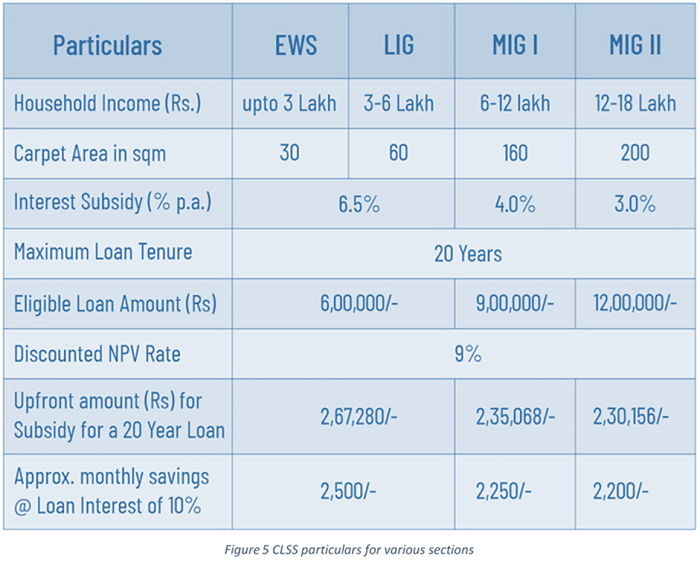 Credit linked subsidy would be available for housing loans availed for new construction and addition of rooms, kitchen, toilet etc. to existing dwellings as incremental housing. The carpet area of houses being constructed or enhanced under this component of the mission should be up to 30 sq. metres and 60 sq. metres for EWS and LIG, respectively. The beneficiary, can build a house of larger area but interest subvention would be limited to first Rs. 6 lakhs only.

Preference under the Scheme is given to Manual Scavengers, Women (with overriding preference to widows), persons belonging to Scheduled Castes/Scheduled Tribes/Other Backward Classes, Minorities, Persons with disabilities and
Transgender. An overall flowchart representation of this component has been provided in Figure 2. It is the third vertical component in the scheme. This scheme provides financial assistance to the EWS housing in partnership with State/UTs. Unlike previous components this is driven by the factor of ‘supply side intervention’. States are directed to formulate affordable housing projects in partnership with private entities. Centre would be providing an assistance ship of ₹1.5 lakh per EWS house in the affordable housing project. States are also allowed to provide a state subsidy scheme and other concessions such as stamp duty exemptions, land at affordable cost, providing a ceiling cap on the pricing of EWS houses etc. A detailed pictorial representation on the sale prices is given in Figure 3. Condition for eligibility for central sponsorship

Eligibility status for the beneficiaries under AHP

They should be a part of ‘Housing of All’ Plan of Action. In this preference of allotment would be given in the order of physically handicapped persons, senior citizens, schedule castes, schedule tribes, other backward castes, minority, single woman, transgender and other weaker and vulnerable sections of the society. Also, physically handicapped and senior citizens will be preferred for ground floor house allocation.

This is the fourth and last vertical component among the four components of the scheme. Under this vertical component, financial assitance is given to EWS families who were not able to take advantage of other components. The unique fact here is that it would be provided for the purpose of construction of new houses as well as for the enhancement of the existing houses. Another thing here is that they must be willing to either construct or rejuvenate their house on their own. Such families are eligible to availing ₹1.5 lakhs for construction of new house under this scheme. These families need to be a part of ‘Housing for All’ Plan of action (HFAPoA). Financial contribution by State/UTs/Cities may also be provided for the individual house construction.

Condition for eligibility for central/state sponsorship

Central assistance would only be provided when the beneficiary has the required finance from different sources including his own contribution. The funds provided to the state by central government would be lumpsum amount. The state would be providing amount it in three to four instalments. This would be depending upon the status of construction work of the house and the last instalment would be ₹30,000 which will be released on the completion of the house. An overall flowchart representation of this component has been provided in Figure 4. 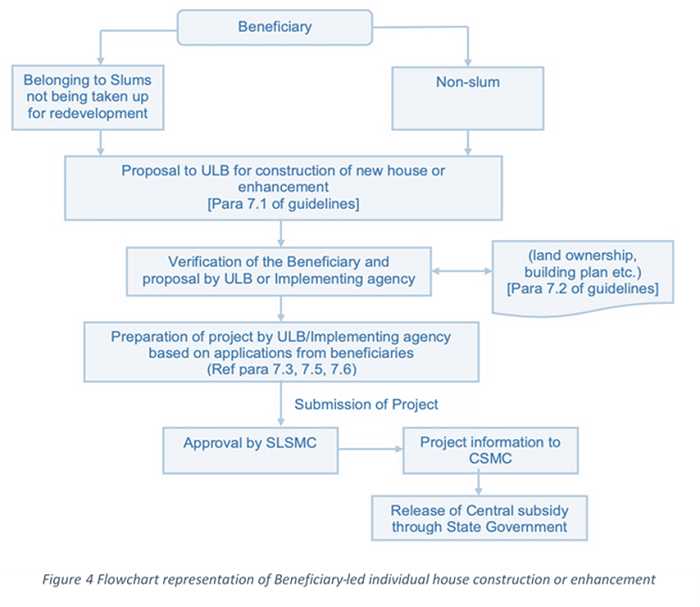 Challenges of the Scheme

This mission which is envisaged by Government of India is a great initiative in order to upbring the urban poor still there exists a lot of challenges. Some of them includes:

A pictorial representation has been depicted for knowing the current status that has been achieved by all the four vertical components under Pradhan Mantri Awas Yojana (Urban). 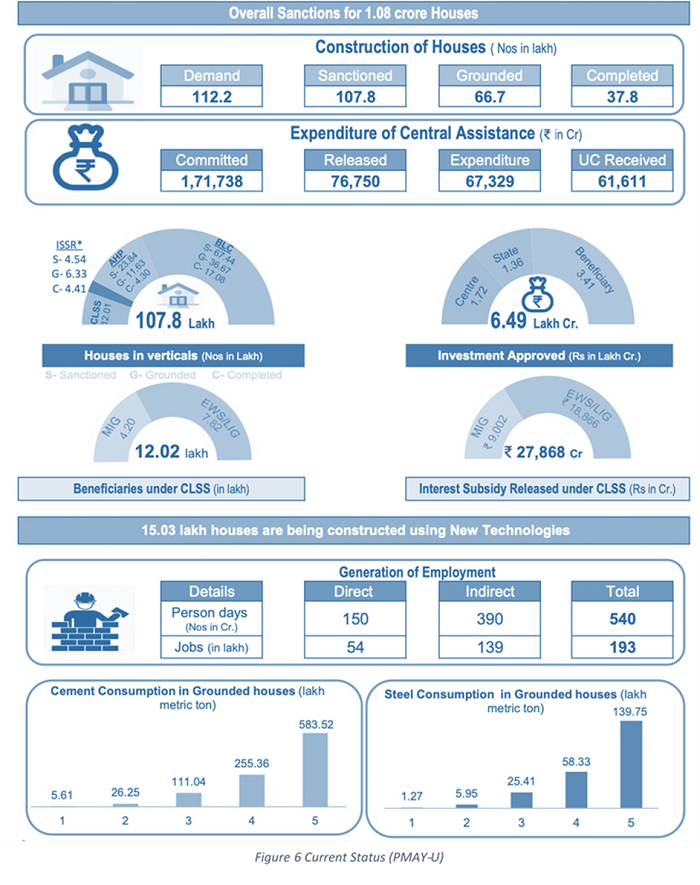 Following factors can be considered for further improvement

Articles published under this account are from the various members of NOSPlan - Organisation of Students of Planning, India.