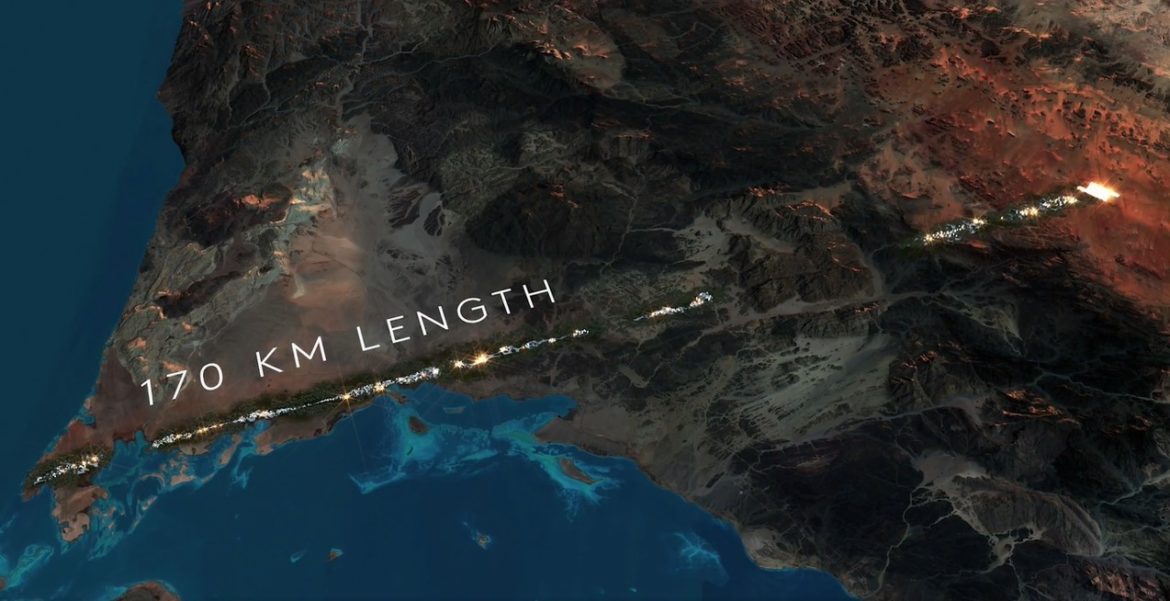 The idea of NEOM city emerged from the Saudi Vision 2030 which aimed to diversify its economy and create a new city powered solely by wind and solar energy, and innovations in infrastructure and mobility. Designed with an emphasis on sustainability, it included plans to reduce up to 70 per cent carbon emissions by 2030. On 24 October 2017, Mohammed Bin Salman, the Crown Prince of Saudi Arabia and Chairman of the Neon Company Board of Directors, announced a 500 billion dollar planned smart city, NEOM. It is located in Northwest Saudi Arabia near the borders of Egypt and Jordan. As part of NEOM, the Prince also announced to build a 170 km long linear city without cars and streets, built around nature.

The line is proposed to be a home for more than one million people from all over the world. It will connect four distinctive ecologies – coastal, desert, mountain, and the upper valley. According to sources, all energy in Neon will be 100 per cent renewable from solar, wind, and hydrogen-based power generation, thereby ensuring clean and pollution-free urban environments. The total cost of building ‘The Line’ is estimated at 1 trillion dollars.

Timeline and Vision of the Line

“The line is the first time in 150 years that a major urban development will be designed around people, not roads. Walkability will define the line that will consist of all essential daily services such as schools, medical, clinics, leisure facilities, and green spaces. All communities will be able to access them within a five-minute walk.” – Mohammed Bin Salman.

The Line – A linear city of NEOM

The Line is set to transform NEOM into a global hub for innovation and technology. It aims to attract people from around the globe. The vision statement reads, ‘A world-class smart city, built on a foundation of sustainability.’ It further reads that the line will preserve 95 per cent of nature with its zero carbon emission. Thus ensuring that the line is a direct response to some of the most pressing challenges faced by humanity today including legacy infrastructure, pollution, traffic, and human congestion. Thus, the Line is set on achieving three main goals:

The line is developed as a cornerstone of Saudi Vision 2030 and an economic engine for the Kingdom. It will drive diversification and aims to contribute 3,80,000 jobs in the future. Serving as a tourist destination and an economic hub, it is expected to contribute 180 billion dollars to domestic GDP by 2030. Thus becoming less reliant for oil and other fossil fuels. According to Farag (2019), the Saudi leaders are seeking to diversify their economy in the long term by developing existing cities and infrastructure along with building new communities. Further, new investments will be encouraged by inviting local investments within the resources and infrastructure of the country, including investments that rely on natural resources of wind, solar, etc.

Key planning features of the Line

A futuristic city of million residents has been planned with the concept of walkability, sustainable and clean energy, and powered by Artificial Intelligence. The city is intended to be developed with three layers for pedestrians, transport and infrastructure. 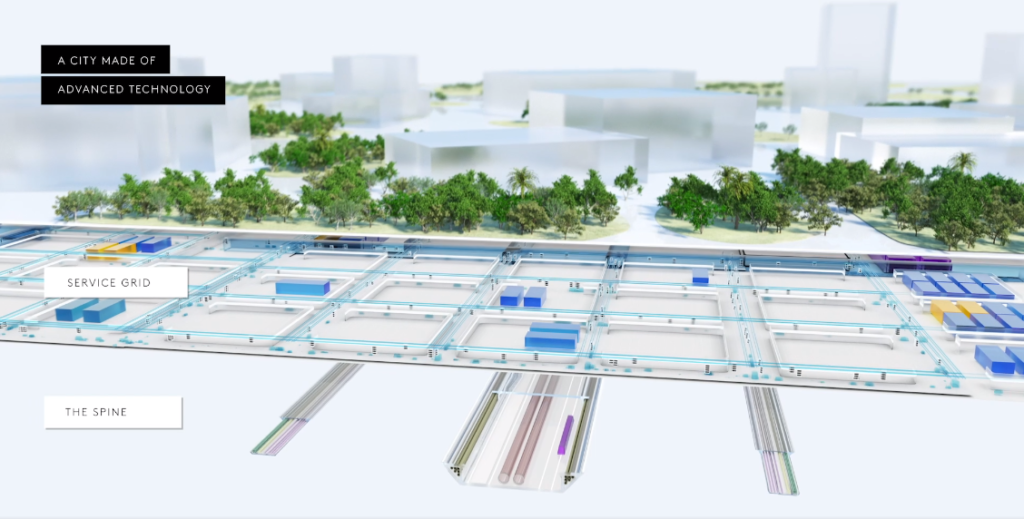 On the ground level, there will be a complete pedestrian zone, without any roads and cars. With walkability as the focus, all essential services will be located within a distance of five minutes walk.  The second level is also called the service layer. It will contain all daily service facilities such as schools, medical clinics, and leisure facilities.

The third and lowest level will be the spine of the city, i.e., transport and circulation. An ultra high-speed transit system is also proposed. This will allow people to travel to any point along the LINE within just 20 minutes. This spine is proposed to connect different city modules with each other so that all errands and activities can be done by public transport and walking. service level hosting shops and other commercial spaces. In addition, artificial intelligence is to be used to simplify the lives of residents and use resources more effectively.


The entire layout is designed around the premise that many big cities of today are a result of the industrial revolution. As such, they were built more for machines, cars, and industry rather than for the people that live in them. The Line visions to do-away with the idea of suburban cities, which encroaches into the natural world. Instead, it aims to build a space for both human and nature to co-exist.

Four distinctive ecologies of the Line

The Line will be split among four distinct ecologies with an average temperature of 10 degrees Celsius (18 degrees Fahrenheit). The first ecological zone will be the coastal sector. This sector will serve as a tourist destination with beaches, islands and nature reserves. The second will be the coastal desert. It will serve as a major transport crossroads for the city and a solar generation center. The third will include the mountains, and will be the least developed and populated. However, it will serve as a center for hiking, climbing, and other adventurous sports. Lastly, the upper valley will have wind turbines, supply chains and logistics connections to the nearby city of Tabuk and the rest of Saudi Arabia. 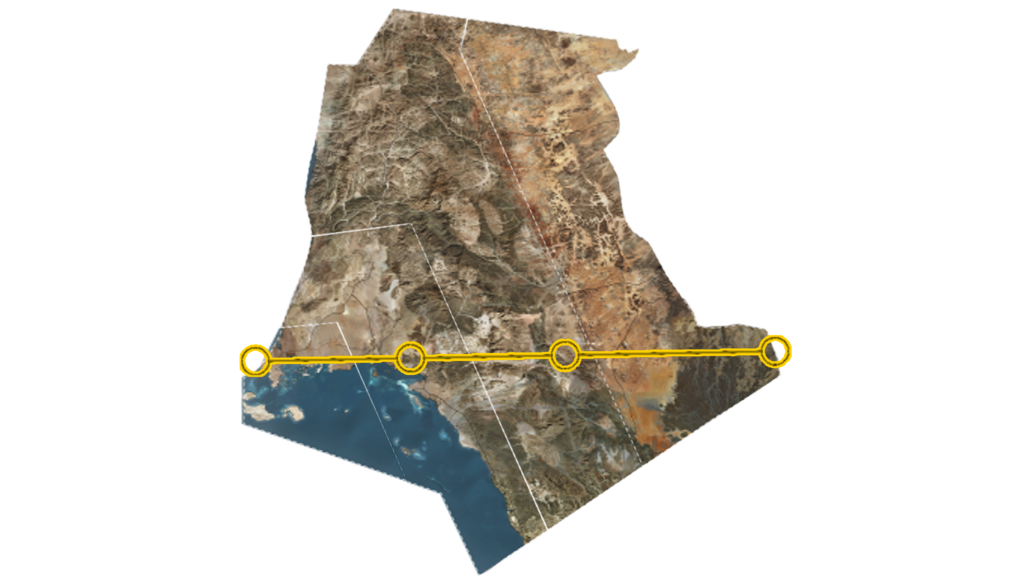 Shortcomings of the Line project

Despite the ambitious project, there are a few shortcomings that the Line faces since its inception. Firstly, the Line will require massive investments from various sectors of the government, including for land acquisition and infrastructure development. However, once completed, the Line will provide a new standard of living for the inhabitants of Riyadh.

Another shortcoming is that the plan does not take into account the needs of the local population. A part of the project is being built on the land of the Al-Huwaitat tribe. They have lived in Saudi Arabia, Jordan and the Sinai peninsula for generations, tracing their lineage back even before the founding of the Saudi state. The tribe, with around 20,000 people, is facing displacement. Some of the tribesmen are already protesting against the project, claiming that the Line will destroy their homes and livelihoods. There are also concerns about the environmental impact of the project on the surrounding area. Further, the city’s design in the linear form is fascinating, however, the distances in the linear form are generally longer. The project has not explained how this layout itself contributes to sustainability and shorter transit times.

Urban Planning – The Open but Hidden...